String Collective is a fresh take on the traditional string quartet. Together Tiffany Fox (Violin), Keisha Brooks (Violin), Jenia Thompson (Cello) and April Maule (Cello) are the founding members of what they hope becomes a larger community of local female string players in the future. These classically trained female musicians perform stylish, classical and contemporary arrangements with a uniquely Bermudian twist that audience members of all walks of life can enjoy.

The ladies have a wealth of experience performing for weddings and special events. This includes festival work with Quincy Jones, Kenny Rogers and John Legend. We are regular performers with the Bermuda Philharmonic and co-founders of the Bermuda Youth Orchestra. Tiffany, Keisha and Jenia met whilst studying music in high school and later re-connected upon returning to the island after university. Whilst these three ladies make up the core of String Collective, other valued members include Naphisa Smith, violinist and Ryan Durrant, pianist. 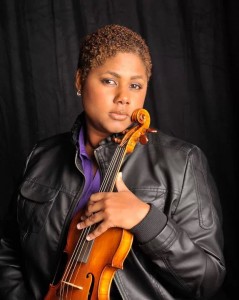 Tiffany Fox began studying the piano with Kate Faries at the age of 8 and later continued with organ and piano teacher, Ruth Henderson throughout secondary school as a Warwick Academy organ scholar. During this same period, Tiffany was introduced to the violin and studied with Sarah Bridgeland of the Menhuin Foundation and later with Jennifer Sheridan of the Bermuda School of Music. Upon leaving Bermuda, Tiffany studied with a number of respectable teachers in the Toronto and Ottawa areas, settling finally at York University, where she studied with Jaime Weisenblum and Yechov Lerner of the Toronto Symphony Orchestra, obtaining a Bachelor of Fine Arts in Violin Performance. After this Tiffany moved to London, England for a year to teach and learn, obtaining a Post Graduate Certificate in Secondary Music Education from the Institute of London. She is currently pursuing a Master’s of Organizational Management through Endicott College and anticipates graduating in 2014. Tiffany maintains a private Suzuki Talent Education studio at her home in Southampton, teaches instrumental music at CedarBridge Academy and is very active in the music ministry of Christ Anglican Church, Devonshire. She regularly performs with the Bermuda Philharmonic Society, AMG String Quartet (of which she is a founding member) and enjoys solo gigs at small events. 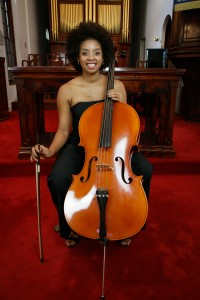 Jenia began studying the cello at age 8 with Allison Johnston of the Menuhin Foundation. Having studied Business Administration at Wilfrid Laurier University Jenia realized that she continues to have a passion for performance. She returned to the cello and enjoys the creative freedom it allows her. Jenia has always believed the cello is the best string instrument. 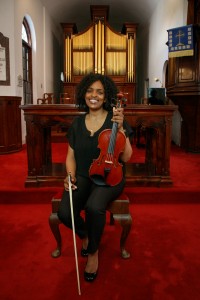 Keisha began studying the violin at the tender age of 4 years old with Robert Wakely at the Dunbarton School of Music. Upon entering highschool, she continued lessons with Sarah Bridgland of the Menhuin Foundation. During her time at Howard University, where she studied Computer Based Information Systems and Analysis, Keisha took a break from public music performance but her passion for playing stayed with her. Having had a successful musical childhood, Keisha returned to the violin as a hobby as an adult, performing with the AMG Trio and the Bermuda Philharmonic Orchestra. She is a law enforcement officer, loving mother and truly believes that playing the violin is vital to her life balance. 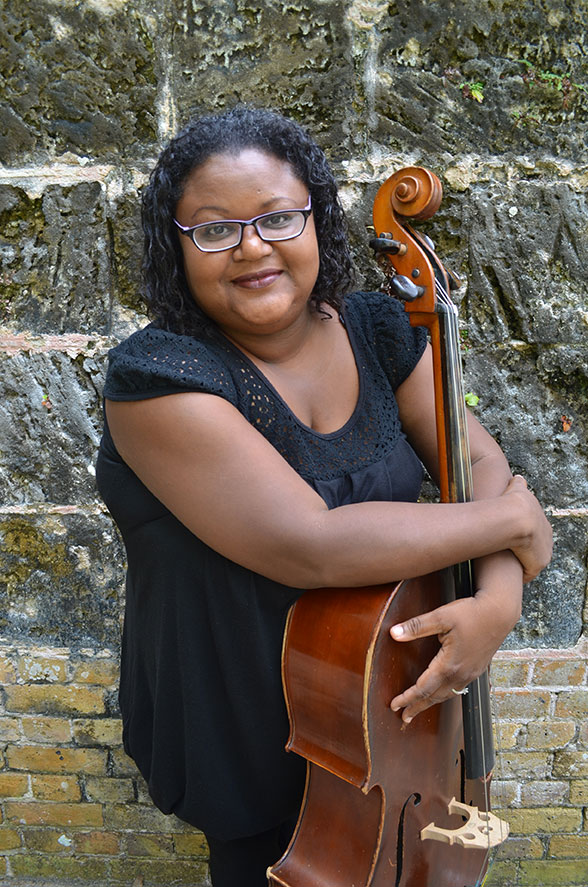 April Roach Maule, Born was born in Trinidad to a musical family. At the age of 7 she began formal music lessons on the violin and piano. This led to her playing in various church services throughout the island with her grandfather’s orchestra. During her high school years she joined the Trinidad and Tobago Youth Symphony Orchestra playing violin and it is here that she developed a love for the cello.
At the age of 18 she got her first cello which she took with her to University in Berrien Springs, Michigan. At Andrews University she played cello with the Michiana Symphony Orchestra while pursuing a Bachelor’s Degree in Biology with a minor in music.
Upon graduation, April moved to Massachusetts, then New York and Maryland. Over the years she has enjoyed teaching violin and playing the cello with orchestras such as The University Blvd Chamber Orchestra, Reid Temple AME Orchestra, Howard University Church Orchestra, Washington Adventist University Orchestra, Sligo Recorder Baroque Chamber group, and filling in with The New England Symphony Orchestra during the summers. She has also enjoyed performing with various string quartets and performing on recordings for artists, saxophonist, Courtney Fadlin and singer, Nhojj.
In April of 2009 she married trombonist Graham Maule and moved to Bermuda. April began teaching the Pre-K class at Seasons Learning Center Nursery/Preschool. While employed here, she also taught the students violin and piano, collaborating creatively with the students and colleagues on school productions and public performances. She is currently head teacher of the Bermuda Institute Pre-Kindergarten Program where she continues to use her musical talent to prepare her students to perform before an audience.
April also plays with the Bermuda Philharmonic where she met Tiffany Fox among other musicians. Their musical bond led to her joining String Collective as a cellist, and it has been a match made in heaven.